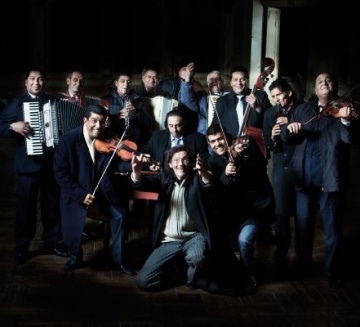 The Taraf de Haidouks - the name literally translates as "band of honourable brigands" - are a bunch of extraordinary and colourful characters, who have managed to convince the audiences of the biggest World Music festivals. "Their wild energy is the essence of gypsy music ... their set seemed like the bubbling source of 20th century rhythm ... they spun out cadences that recalled bebop, salsa, and the polyrhythms of Zimbabwe and Nigeria" (The New York Times), "the band that's wowing London" (The Evening Standard, 7 June 2001) through their rhythmically complex songs with grace, easy camaraderie and sense of mischief wins over everybody in concerts.

The three first albums explore the local resources and traditions. For the fourth album, always eager to expand the scope of their music, the "best Gypsy band in the world" (as recently described by UK daily The Independent) have decided to confront their styles to those of other Balkan countries by inviting Gypsy virtuoso musicians from Macedonia (the Koçani Orkestar brass band), Bulgaria (clarinet player Filip Simeonov) and Turkey (percussionist Tarik Tuysuzoglu) to join them on stage. The result is a series of exciting mixtures in which magical moments abound.

Along with these ambitious compositions one will rediscover with great pleasure the fantastic atmosphere of a Taraf de Haidouks live performance in a collection of previously-unrecorded pieces featuring the various singers and soloists in top form and particularly galvanized by the importance of the event. These were indeed the band's first ever concerts in the Romanian capital; after ten years of international success the Taraf were still not recognized in their own country (maybe because they were perceived as Gypsies rather than as musicians).