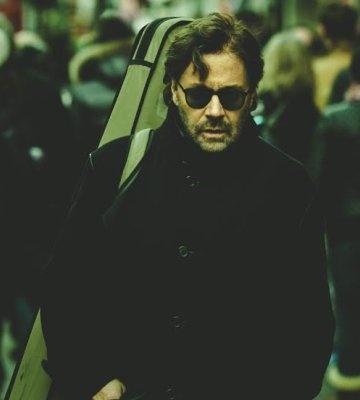 A  bona  fide  guitar  hero  and  perennial  poll-winner,  Al  Di  Meola  has  been  recognized internationally  over  the  past  four  decades  as  virtuoso  of  the  highest  order.  A  prolific composer  and  prodigious  six-string  talent,  Di  Meola  has  amassed  over  20  albums  as  a leader while collaborating on a dozen or so others with the likes of the fusion supergroup Return To Forever (with Chick Corea, Stanley Clarke and Lenny White), the celebrated acoustic guitar trio featuring fellow virtuosos John McLaughlinand Paco de Lucia, and the Rite of Strings trio with bassist Clarke and violinist Jean-Luc Ponty. And while his dazzling  technique  on  both  acoustic  and  electric  guitars  has  afforded  him  regal  status among the hordes of fretboard aficionados who regularly flock to his concerts, the depth of  Di  Meola's  writing  along  with  the  soulfulness  and  his  inherent  lyricism  of  his guitaristic  expression  have  won  him  legions  of  fans  worldwide  beyond  the  guitar aficionado set.

A  pioneer  of  blending  world  music  and  jazz, going  back  to  early  Latin-tinged  fusion outings like 1976's Land of the Midnight Sun, 1977's Elegant Gypsyand 1978's Casino, the  guitar  great  continues  to  explore  the  rich  influence  of  flamenco,  tango,  Middle Eastern, Brazilian and African music with his World Sinfonia, an ambitious pan-global group  that  he  formed  in  1991.  Their  exhilarating  world  music  fusion  has  been documented  on  such  releases  as  2000’s The  Grande  Passion (featuring  the  Toronto Symphony Orchestra), 2007’s Live in London, 2011’s Pursuit of Radical Rhapsodyand the stunning 2012 DVD, Morocco Fantasia(recorded at the Mawazine Festival in Rabat, Morocco and featuring special guests Said Chraibi on oud, Abdellah Meri on violin and Tari Ben Ali on percussion).

Di Meola’s most recent release, 2013’s All Your Life, is an acoustic tour de force that has him revisiting the music of a seminal influence –The Beatles. “I really credit the Beatles for the reason why I play guitar,” he says. “That was a major catalyst for me to want to learn music. So their impact was pretty strong.” A virtual one-man show of virtuosity, it features  the  guitar  great  interpreting  14  familiar  Beatles  tunes  in  the  stripped-down setting of strictly acoustic guitar. While overdubbing two and three guitar parts to get the rich,  shimmering  textures  and  intricate  patterns  of  the  original  pieces,  Di  Meola  added percussion by slapping the wooden body of his instrument or strumming muted strings for  percussive  effect.  All  the  tracks  are  imbued  with  the  guitarist’s  signature  flamenco flourishes, intricate arpeggiating and dazzling cross-picking. Only on one track does he employ  other  musicians  (a  dramatic  reading  of  “Eleanor  Rigby”  that  features  a  string quartet).  Recorded  in  analogue  at  Abbey  Road  Studios  in  London,  where  the  Beatles created most of their records during their heyday, All Your Lifestands as a triumph in the long and illustrious career of a bona fide guitar hero. “I’ve come full circle with this,” says Di Meola. “I started out my life loving the Beatles, and I never stopped, just like a lot  of  so  many  other  guitarists  from  my  generation.  In  the  middle,  we  all  went  into whatever music we pursued in our careers --fusion, jazz, whatever it might be. We all wanted  to  further  our  craft.  But  when  you  come  back  to  the  Beatles’  music,  it’s  like, ‘Man, this stuff is still happening! All of it!’ And there’s not a day that goes by that we’re not somehow touched by the Beatles, whether it’s a story online or something we hear. It’s almost every day that we see some connection in our lives with the Beatles.”

Di  Meola's  ongoing  fascination  with  complex  rhythmic  syncopation  combined  with provocativelyrical melodies and sophisticated harmony has been at the heart of his music throughout a celebrated career that has earned him critical accolades, three gold albums and more than six million in record sales worldwide. He has been particularly enamored over  the  past  20  years  by  the  tango  music  of  the  late  Argentinian  composer  Astor Piazzolla,  whose  compositions  he  has  interpreted  over time,  beginning  with  1990's Di Meola  Plays  Piazzolla,  continuing  to  1993's Heart  of  the  Immigrants,  2002's Flesh  on Flesh and  right  up  to  2007's Diabolic  Inventions  and  Seduction  for  Solo  Guitar. "Piazzolla had a profound effect on my development as a musician and as a person,” says Al. “We became close friends, often communicating by mail. And during the course of this friendship my admiration and desire to learn more about this great man intensified.”

A  native  of  New  Jersey  who  still  resides  in  the  Garden  State,  Di  Meola  was  born  in Jersey City on July 22, 1954. Growing up in Bergenfield with the music of Elvis Presley, The Ventures and The Beatles, he naturally gravitated to guitar as a youngster and by his early teens was already an accomplished player. Attaining such impressive skills at such a young age didn't come easy for Al but rather was the result of focused dedication and intensive periods of woodshedding between his junior and senior years in high school. “I used to practice the guitar eight to ten hours a day,” he told DownBeat. “And I was trying to find myself, or find the kind of music that suited where I was going with the guitar.”

His  earliest  role  models  in  jazz  included  guitarists  Tal  Farlow  and  Kenny  Burrell.  But when he discovered LarryCoryell, whom Al would later dub “The Godfather of Fusion,” he was taken with the guitarist's unprecedented blending of jazz, blues and rock into one seamless vocabulary on the instrument. “I used to ride the bus from New Jersey to see him at little clubsin Greenwich Village,” he recalls. “Wherever he was playing, I'd be there.” In 1971, Al enrolled at the Berklee College of Music in Boston and by the second semester there began playing in a fusion quartet led by keyboardist Barry Miles. A gig tape of that band was later passed on to Chick Corea by a friend of Al's and in the early part  of  1974  the  19-year-old  guitarist  was  tapped  to  join  the  fusion  supergroup  as  a replacement for guitarist Bill Connors. “I was just sitting around my apartment in Boston ona Friday afternoon when Chick called and asked me to come to a rehearsal in New York,” he recalls. “I couldn't believe it. But in 10 minutes I packed some clothes in a bag, got a ride to New York and never saw that apartment in Boston again.”

Following  a weekend  of  rehearsals  with  Chick,  Stanley  Clarke  and  Lenny  White,  Di Meola  made  his  RTF  debut  at  Carnegie  Hall  on  July  3,  1974,  officially  launching  his career  into  the  stratosphere.  "Playing  with  Chick  in  Return  To  Forever  was  the  first significant  step in  my  development  as  a  player,”  says  Al.  “Chick  is  another  major influence  in  my  life.  He  has  always  been  a  wonderful  supporter,  major  musical inspiration  and  a  friend.”  After  three  landmark  recordings  with  Return  To  Forever --1974's Where  Have  I  Known  You  Before,  1975's  Grammy  Award  winning No  Mystery and 1976's Romantic Warrior --the group disbanded and Al subsequently started up his career  as  a  solo  artist.  His  1976  debut  as  a  leader, Land  of  the  Midnight  Sun,  was  a blazing  showcase  of  his  signature  chops  and  Latin-tinged  compositions  that  featured  a stellar cast including drummers Steve Gadd and Lenny White, bassist Anthony Jackson and  Jaco  Pastorius,  keyboardists  Jan  Hammer,  Barry  Miles  and  Chick  Corea  and percussionist Mingo Lewis. Over the course ofsix more albums with Columbia Records -- Elegant  Gypsy, Casino, Splendido  Hotel, Electric  Rendezvous, Tour  De  Force and Scenario --Al established himself as an influential force in contemporary music.

In  2008,  after  25  years  of  being  apart,  the  potent  Return  to  Forever  featuring  Corea, Clarke, White and Di Meola reunited for a tour of North America and Europe that began in Austin, TX, onMay 29, 2008. They played 50 dates through August 7 of that year, which yielded the live two-CD set Returnsand the concert DVD Live at Montreux. Di Meola has since focused on his New World Sinfonia band featuring Fausto Beccalossi on accordion, Peo Afonsi on acoustic guitar, Peter Kaszas on percussion, Gumbi Ortiz on percussion and Victor Miranda on bass. “The RTF reunion tour was fun and it was great for  the  fans,  but  it  was  more  of  a  nostalgic  thing,”  says  Al  in  retrospect.  “I'm  more interested  now  in  moving  forward  with  the  New  World  Sinfonia,  which  has  really developed into something beautiful. For me, it's the most rewarding thing I've done in a long,  long  time,  all  the  way  around.  You  don't  have  the  overbearing  volume  with  this band.  Instead  you  have  a  rich  harmonic  kind  of  music  with  lots  of  improvisation,  youhave a music that is emotional, which really reaches far beyond the almost head-banging male crowd that electric fusion attracts.”

In  the  past  year,  Di  Meola  has  done  duet  tours  with  the  great  Cuban  pianist  Gonzalo Rubalcaba.  During  this  summer  of  2013, following  the  release  of  his  Beatles  tribute album All Your Life, he plans to tour with World Sinfonia augmented by a string quartet in a program entitled “Beatles and More.” Says the guitar great, “I’ve come full circle with this Beatles project. I started out my life loving the Beatles, and I never stopped, just like a lot of so many other guitarists from my generation. In the middle, we all went into whatever music we pursued in our careers --fusion, jazz, whatever it might be. We all wanted  to  further our  craft.  But  when  you  come  back  to  the  Beatles’  music,  it’s  like, ‘Man, this stuff is still happening! All of it!’ And there’s not a day that goes by that we’re not somehow touched by the Beatles. So this project has been immensely fulfilling. It’s a lifelong dream come true, long overdue.”